Paul Taylor was born on August 24, 1920 in Chamberino, NM. His father, William Robert Taylor, was a Texas native whose family owned a dairy in El Paso. His mother, María Margarita Romero, traced her ancestry to Juan de Cabeza de Vaca, a soldier with Coronado’s expedition in 1540 and two of the original colonists who came to New Mexico in 1598. The Romero side of J. Paul’s family also included two Spanish Colonial governors, the founder of the Republican Party in New Mexico, and an alcalde of Las Vegas, NM.

In 1942, Taylor earned a bachelor’s degree in history from what was then the New Mexico College of Agriculture and Mechanic Arts. After wartime service in the Navy he earned two additional degrees in education and later an honorary doctorate from NMSU. In 1945, J. Paul married Mary Helen Daniels, a schoolteacher from El Paso. They purchased an adobe home on the west side of the Mesilla Plaza in the early 1950s and proceeded to raise seven children within its renovated walls. 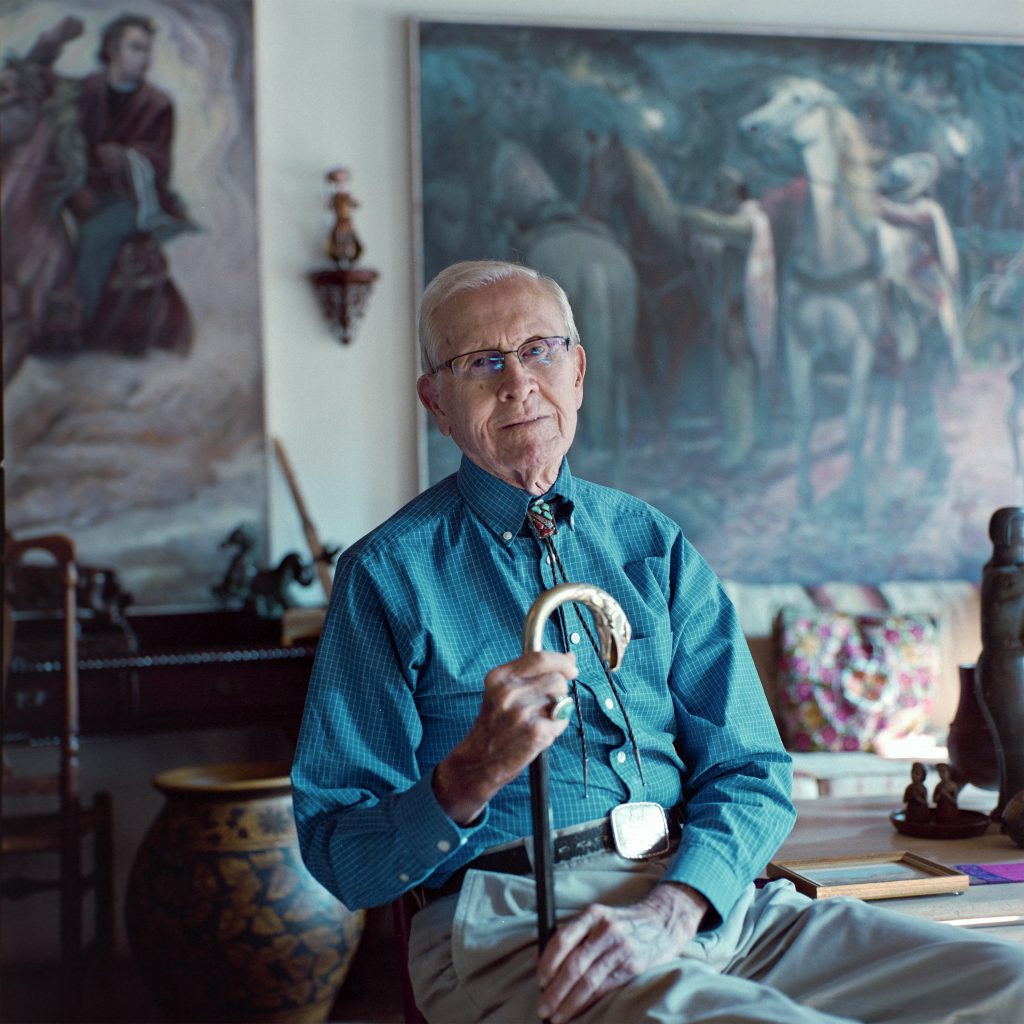 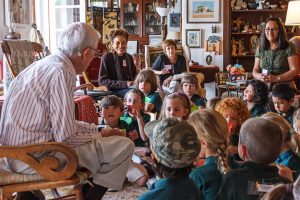 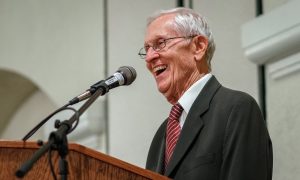 Taylor spent more than three decades (1951-1985) as a teacher, principal, and associate superintendent in the Las Cruces Public School system. For nine consecutive terms he served as the Democratic Representative for District 33 in the New Mexico legislature where he was known for his support of programs to help indigent and disabled New Mexicans, and as an advocate for arts and culture. Mr. Taylor was called “the conscience of the New Mexico Legislature.”

In recognition of his contributions to enhancing the quality of life for all New Mexicans, J. Paul Taylor has received numerous honors and awards. There are too many to list but a few examples help demonstrate his deep commitment to public service. An honorary doctorate was conferred by New Mexico State University in 1985 for his “…exemplary service as an educator, civic leader, Hispanic historian, architectural conservationist, antiquarian and builder of libraries in his native New Mexico; and for his unselfish and visionary leadership to education, museums, and diverse other public institutions….”

The National Education Association of New Mexico Southwest District granted him Hall of Fame membership in 1985 “in recognition of distinguished service to the children of New Mexico, for contributions to the advancement of the teaching profession, and for devotion to the ideals of public education.” Other educational accolades include the National Education Association’s New Mexico Honor Award for “outstanding service to the profession” (1985), and the National Association for Bilingual Education Pioneer in Bilingual Education Award for “significant contributions to the education of linguistic minority children in the United States” (1992). The state Office of Child Development Services recognized his contributions to the field of early childhood development by setting up the J. Paul Taylor Early Childhood Development Fund. In 2006 he was given the Branding Iron Award by the NMSU Foundation for “outstanding contributions to New Mexico State.” The J. Paul Taylor Academy, a K-8 public charter school, in Las Cruces, NM was also named in his honor.

Taylor’s dedication to arts and culture has also been well acknowledged. In 1988 he won the Doña Ana Arts Council Mesilla Valley Treasure Award for his “daily efforts to support and encourage the arts, to preserve the historical traditions of the arts, and to teach people that art, culture, history and life are inseparable.” He was given the Hispanic Leadership Development Program Award “in appreciation for …significant support and contributions to the Hispanic community and in demonstrating the qualities of leadership” (1992).

In addition, Mr. Taylor has served three terms as a member of the Museum of New Mexico Board of Regents. The Regents are appointed by the governor to establish policy, determine the mission, and direct the development of the fifteen divisions of the Department of Cultural Affairs. His daughter, Mary Helen, accompanies him on trips for his bi-monthly meetings around the state. She comments, “My Dad has been an active participant during his tenure. He studies the materials and notes and is totally engaged and dedicated to the Department of Cultural Affairs and Historic Sites. His wisdom is valued, and his comments are right on. We seldom miss a meeting.” 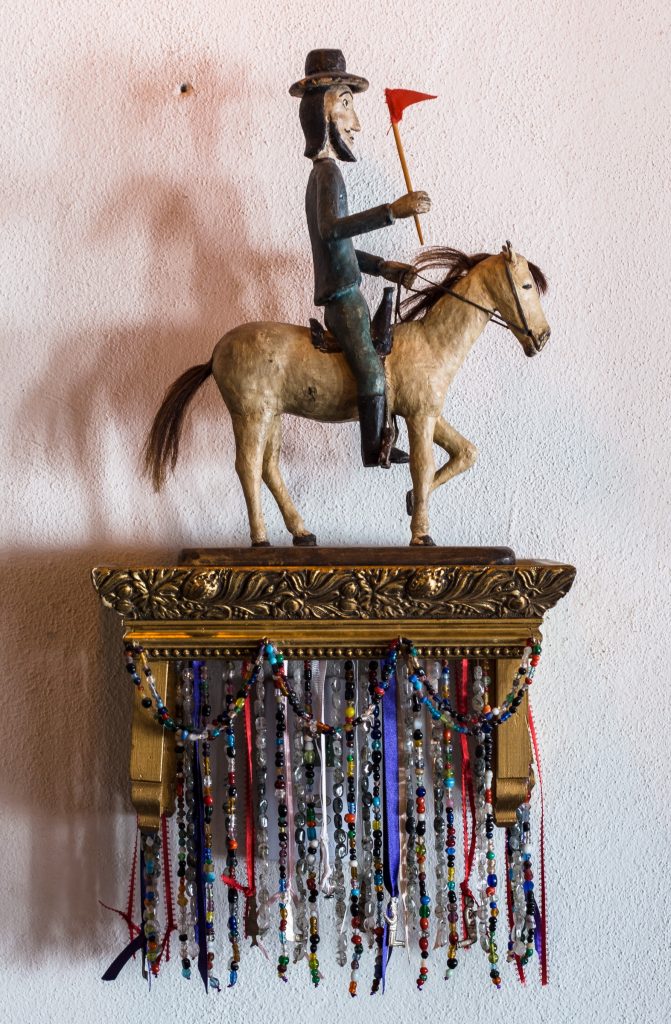 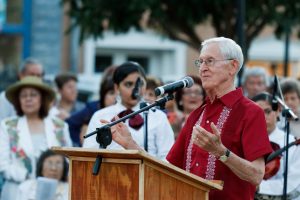 The J. Paul Taylor Juvenile Detention Center and the NMSU J. Paul Taylor Social Justice Symposium have been named in his honor. He also received the Border Health Lifetime Achievement Award for “outstanding contribution and service to the improved health in the United States-Mexico border region” from New Mexico Border Health Council in 2002, and the Lifetime Achievement Award from the Community Action Agency in 2004.

Though his public accomplishments are remarkable, Paul’s love for his wife, Mary Daniels Taylor, and their seven children, 17 grandchildren, and 18 great grandchildren have been the joy of his life. Mary was an accomplished historian, paleographer, archivist, writer, and photographer, as well was an active member of the church and local community. Mary grew up in El Paso on the border within a few hundred yards of the Rio Grande next to Smeltertown where her father was foreman of the cement plant. Her notable book, “A Place as Wild as the West Ever Was: Mesilla, New Mexico: 1848-1872” was published in 2004.

Mary was a perfect companion and partner to Paul as the two dedicated themselves to serving the people of New Mexico. Their son Mike Taylor remembers that the two shared in exploring the backroads of southern New Mexico together with all seven children in tow in their Volkswagon microbus, locating old trails and historic sites that Mary had researched in archives through primary sources. The two were also responsible for getting the Durango, Mexico diocesan archives microfilmed so that researchers would have access to the wealth of information. This project has greatly broadened and enhanced our understanding of the history of what is now New Mexico. Copies of these archives are now housed in Durango and at the New Mexico State University Library, Special Collections Department.

Mr. Taylor’s affection for the town of Mesilla and for preserving its history and heritage has been a life long journey. The Taylors made a conscious decision to raise their family in Mesilla in part because they wanted their children to grow up in a multicultural community. Paul served as a Mesilla Trustee for many years during which time he and others crafted ordinances that today help protect the historic integrity and rural nature of the town that is listed on the New Mexico State Register of Cultural Properties and the National Register of Historic Places. The core of the town surrounding the plaza is listed as a National Landmark. The town also honored him by naming the Mesilla Town Hall the J. Paul Taylor Visitor Center.

The Basilica of San Albino is a three-minute walk from the Taylor home and has been central to the Taylor family life for over 68 years. J. Paul and Mary were active in the daily functions of the church, and the children served as altar boys and Daughters of Mary. For their service and devotion to the church, J. Paul and Mary were inducted into the Equestrian Order of the Holy Sepulchre of Jerusalem, a Roman Catholic order of knighthood under the protection of the Holy See.

In 2003, J. Paul and the late Mary Daniels Taylor and their family generously donated their historic adobe home and two adjoining stores to the Museum of New Mexico as a State Historic Site. The Taylor-Barela-Reynolds-Mesilla Historic Site, as it is called, provides an exceptional setting for visitors to understand and appreciate the history, culture, and architecture of Mesilla and the Borderland. The Taylor family collection of Spanish Colonial, Mexican, and New Mexican artwork, along with furniture, rugs, pottery, and textiles from all over the world, was donated as part of the gift. Generations of New Mexicans and visitors from all over the world will experience New Mexico through its lens.

For those of us who have had the privilege of being his friend, his acquaintance, or just a fan, we know that he is leaving us a legacy of generosity, kindness, compassion, and the responsibility to make our communities and state a better place. We can thank him because we have his example to follow into the future. 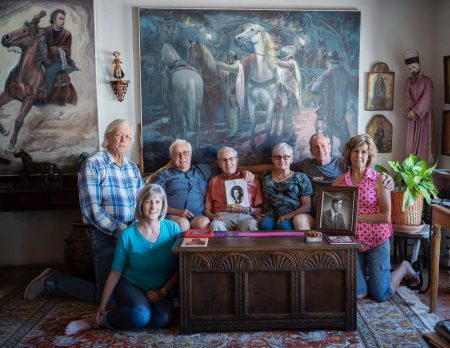